Martin Scorsese explores the life of organized crime with his gritty, kinetic adaptation of Nicolas Pileggi’s best-selling Wiseguy, the true-life account of mobster and FBI informant Henry Hill. Set to a true-to-period rock soundtrack, the story details the rise and fall of Hill, a half-Irish, half-Sicilian New York kid who grows up idolizing the “wise guys” in his impoverished Brooklyn neighborhood. He begins hanging around the mobsters, running errands and doing odd jobs until he gains the notice of local chieftain Paulie Cicero (Paul Sorvino), who takes him in as a surrogate son. As he reaches his teens, Hill (Ray Liotta) is inducted into the world of petty crime, where he distinguishes himself as a “stand-up guy” by choosing jail time over ratting on his accomplices. From that moment on, he is a part of the family. Along with his psychotic partner Tommy (Joe Pesci), he rises through the ranks to become Paulie’s lieutenant; however, he quickly learns that, like his mentor Jimmy (Robert DeNiro), his ethnicity prevents him from ever becoming a “made guy,” an actual member of the crime family. Soon he finds himself the target of both the feds and the mobsters, who feel that he has become a threat to their security with his reckless dealings. Goodfellas was rewarded with six Academy Award nominations including Best Picture; Pesci would walk away with Best Supporting Actor for his work. 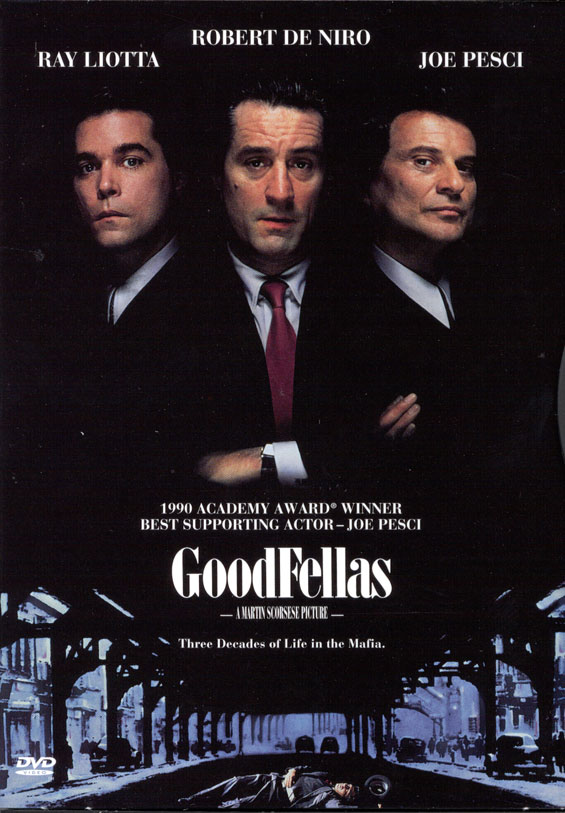