A SITCOM SERIES – A Production By Johnny “Roastbeef” Williams.. 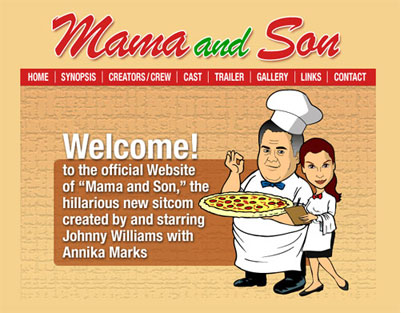 MAMA AND SON is a series based on a relationship between a father, ARTIE CILENTO and his loving daughter, RAMONA. Away after four years at BC’s Business School, RAMONA returns home to her dad, ARTIE, the cook owner of MAMA AND SON Restaurant. The reunion pits the loving daughter and her business ideas of how to run a restaurant against her all knowing dad, the jack of all restauranteurs and master of none.

The series explores an old time DAD who is up against the new world of computers, internet, ipod, and all the tecno rap that is representing the new age world brought into his life in the restaurant by his all loving daughter Ramona. The resistance to change, the stalwart of the old neighborhood method of doing things, and the utmost regard for what relationship was at one time in this old neighborhood in New York sets the backdrop for all the differences to take shape.

The pilot episode is called I WANT MY TABLE, and what that all means here is this: a strange woman comes into the bar early in the morning, way before the doors are open for lunch and approaches the bar where some of the regular guys, neighborhood gents come in for their espresso and an early shot of scotch before they go off to do the street rounds. This woman wants to use a phone, her cell “died on me”, and she comes in making the comment,? this place is so so”…CHARLIE KEYS a regular at the bar says “..old”…”Yes” she replies “is this a theme restaurant?” The bartender JOHNNY DING DONG replies “yeah, Jurassic Park”. Ramona on returning home and laying in bed going through the channels on TV happens to catch the very same woman, famous SHEILA POWERS, CONTESSA OF CUISINE’s review as the New York Times food critic. She gives MAMA five stars on her weekly TV report.

Ramona brings a world of technology and attitude in the restaurant at all costs, and her dad, old Artie hangs on to the state of mind he grew up with in the neighborhood. The stage is set; misunderstood love, a pace too fast for the common man (ARTIE), and RAMONA in all her business acumen resurrecting the dead, MAMA AND SON RESTAURANTE. “Dad, I can build you a website, no problem” and the response she gets from Artie; “there will be absolutely no construction in my restaurant”.

Beside the trailer on this site, Mama and Son Productions has a DVD of twenty-six minutes and a completed pilot episode, along with a five year proposal for this show. For inquiries please refer to the CONTACT link on our website.